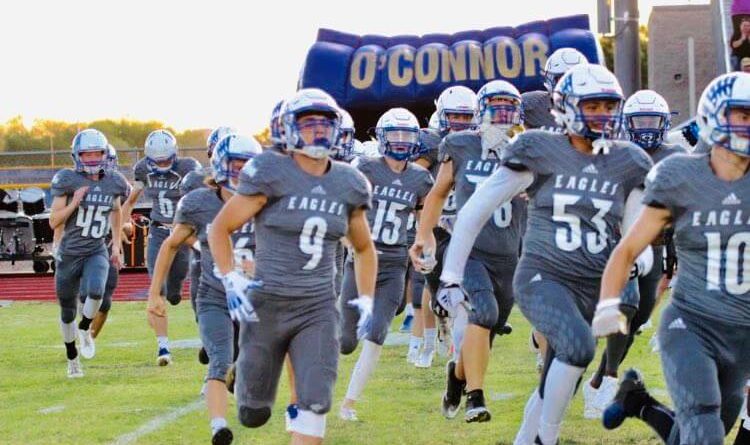 SBLive Arizona will preview every 6A football team in the state leading up to the 2020 high school football season. Here’s our look at the Sandra Day O’Connor Eagles of 6A Region 7 (Southwest).

Region record: 1-4, tied for fifth place in 6A Desert Valley

One of the best linebackers in the state’s Class of 2022, Craddock is coming off a monster sophomore season that earned him second-team all-region honors. He led the Eagles with 90 tackles and 7.5 tackles for loss, and he notched 3.5 sacks. Craddock hopes to play football in college, and based on his 2019 performance, that goal seems well within his reach.

Another returning force in the front seven, Monaco also is coming off a second-team all-region campaign. He totaled 38 tackles, four tackles for loss and 4.5 sacks.

Yet another player to watch in the front seven, Czosnyka made 51 tackles as a sophomore, and he often raised his game against Sandra Day O’Connor’s top opponents. If he takes another leap in performance, the Eagles might have the best front seven in the region.

After missing nearly his entire junior season because of injury, Fontaine is back and ready to carry the load. He rushed for nearly 500 yards as a sophomore, and if he’s at his best in 2020, his reemergence could make the difference for the Eagles on offense.

After tallying 424 receiving yards and six touchdowns as a junior, Groff is the Eagles’ biggest receiving threat entering the 2020 season. At upward of 6-2 with good quickness, don’t be surprised if his production jumps substantially from his junior year.

MacDonald had 49 tackles (two for loss) last season from the cornerback position. He can both cover and hit hard. He’ll be tasked with leading a secondary that’s a little less experienced than the front seven.

It’s been four consecutive losing seasons without a playoff appearance for the Eagles. Is it conceivable for 2020 to be any different?

The answer is yes, it’s possible. On paper, there’s not a single team in Region 7 that anyone within the region can’t beat. If the Eagles’ host of talented returners on defense can buy time for the offense to regather, it’s not impossible to imagine Sandra Day O’Connor contending for a region title.

The catch is that because of the pandemic, only eight teams will make the 6A playoffs instead of the usual 16. While a region title helps the cause immensely, it still doesn’t guarantee a postseason berth. A playoff spot for the Eagles remains extremely unlikely, but a magical season for any team in the region can’t be ruled out.

For Sandra Day O’Connor to compete for anything, the offense will need to rebuild on the fly, and Fontaine will have to come back better than ever. Craddock said the Eagles are expecting Daymian Stewart and Kane Metts-Terrell to round out what could be a big-time receiving corps. If all those pieces come together and quarterback Dylan Simonton is adequately replaced, Sandra Day O’Connor’s skill position unit might be competitive enough for the Eagles to hang around with region foes with more established playmakers, such as Boulder Creek.

Of course, it’s easier to rebuild an offense when a team boasts a defense capable of keeping it in every game. With Craddock, Monaco and Czosnyka leading what could be a dominant front seven — plus expected improvement from defensive linemen Owen Faulkner and Evan Pauling, along with talented sophomore defensive backs Blake Ware and Jaden Pyrah — there’s a chance the Eagles’ defense is that good this season.

Odds are, Sandra Day O’Connor probably isn’t going to contend for a playoff spot, especially given this year’s smaller 6A field. It’s certainly realistic for the Eagles to be competitive every game, but they might not come particularly close to winning their region while going against more experienced teams on a weekly basis.

The offense will have very little continuity in a region where some offenses are returning plenty of firepower. Sandra Day O’Connor has only two all-region players returning. Of the Eagles’ two second-team all-region offensive linemen last season, one graduated and the other transferred.

Even if it ends up being another rebuilding year, the future still appears bright. Sandra Day O’Connor has loads of young talent to gear up for 2021 and beyond — and some beatable opponents against which the less-experienced players can receive some varsity action.

“On the field, both sides of the ball are hungry to take O’Connor’s football program to the next level, and we have lots of speed and athleticism. Off the field, our coaches and players strive to have high character.” — Brandon Craddock