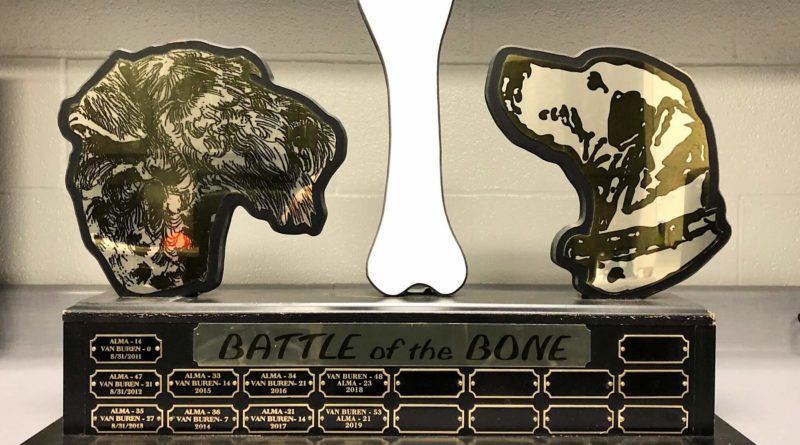 Bryant beat No. 10 Benton 48-7. They dominated early and often, leading 42-0 at halftime. Austin Ledbetter threw four touchdowns for the Hornets.

North Little Rock opens its season against No. 11 Har-Ber this week.

Bentonville takes on No. 6 Conway to begin its season.

Greenwood begins its 2020 season on the road against Southside.

Senior receiver Bryce Bohanon returned the second-half kickoff 70 yards for a TD in Conway’s 38-21 upset win over Fayetteville. The win propels Conway into the Top 10.

Cabot quarterback Tyler Gee had a great start to his senior year leading his team to a 35-18 win over Searcy. With the win, Cabot moves into the Top 10.

Garrett Brown’s fourth quarter touchdown pass to Cameron Harris was the lone score for the Panthers in their 48-7 loss to No. 1 Bryant.

Har-Ber was always going to struggle with Jenks, a national power from Oklahoma, and they lost 31-15. The Wildcats wanted a challenge and that’s what they got. They’ll be battle-tested come playoff time.

Cross Jumper threw three fourth-quarter touchdown passes to lead Jonesboro to a 28-24 win over Catholic (Little Rock) in their season opener. Will Barré had 9 receptions for 233 yards and 3 TDs for the Hurricanes.

Robinson couldn’t keep up with No. 4 Pulaski Academy’s high-powered offense on Friday in their 48-35 loss, but senior receiver Ivan Thomas did haul in an impressive 38-yard TD reception.

Parkview plays White Hall on Sept. 10 to begin its season.

Central led 35-30 in the second half of their loss to LR Christian before running out of gas. Central ended up losing 57-35.

Turnovers were costly on Friday, leading Fayetteville to drop their opener 38-21 to No. 6 Conway. Fayetteville led 14-0 to start the game before unraveling.

Lake Hamilton debuts at No. 18 after junior Tevin Woodley scored three touchdowns to lead the Wolves to a 31-17 win over Lakeside.

Van Buren debuts at No. 19 after beating Springdale 42-24 on Friday. Senior Jaiden Henry had two catches for 72 yards and a TD as well as a 98-yard kickoff return for a score in the win. The Pointers will play Alma on Friday in the annual Battle of the Bone.

Harding Academy will begin its season at Mena this week after having to cancel their season opener due to COVID-19.

Dropped out: Harrison, Fordyce. Despite both teams winning, other teams had more impressive victories to jump ahead of Harrison and Fordyce.