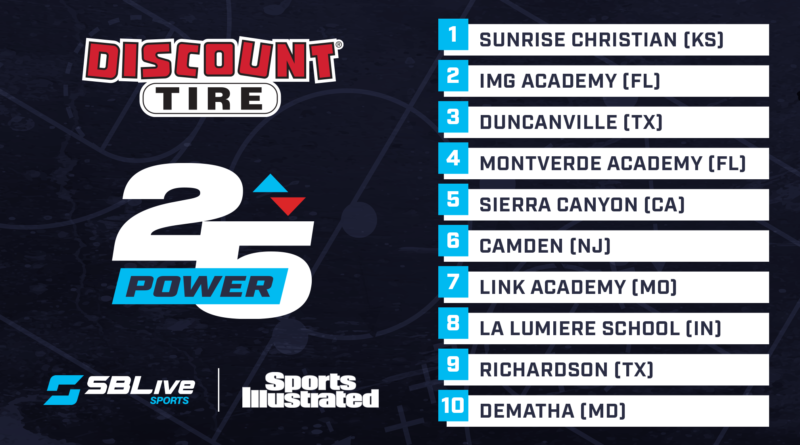 It’s a question we’ve been trying to answer since our preseason rankings debuted in October, and one that in the second week of 2022, may not be any more clear as the race for a spot at GEICO Nationals appears wide open.

Who is the No. 1 high school boys basketball team in the country?

This week, there is a new team at the top of the SBLive/Sports Illustrated Power 25 after another jam-packed NIBC weekend in La Porte, Ind. — Sunrise Christian Academy, which is now the only one-loss team in the NIBC standings.

The Buffaloes went 20 days between games without showing rust. Led by a stellar weekend from Kansas pledge Gradey Dick, they swept three NIBC games in as many days, including a win over No. 3 Montverde — which previously handed SCA its only loss. Dick averaged 21.7 points per game and hit 14 3-pointers over the weekend.

The Power 25, sponsored by Discount Tire, is a collaboration between SBLive and Sports Illustrated. Power 25 rankings are compiled by SBLive reporter Andy Buhler and SI Director of Basketball Recruiting Jason Jordan based on observations and conversations with an extensive network of coaching and media sources across the country. You can reach Andy on Twitter @AndyBuhler or email him at andy@scorebooklive.com.

Returned from a 20-day break between games to rattle off three NIBC wins in three days in La Porte, Ind., including a 71-61 win over No. 3 Montverde (its only loss) behind a standout weekend from Kansas pledge Gradey Dick. Dick hit five 3s in the first half against Montverde, a game Sunrise Christian led by as many as 18 points.

Five-star Anthony Black, newly returned after the latest chapter in his eligibility battle saw him become eligible mid-game, scored 15 points in a 71-55 win over Mansfield Lake Ridge on Friday. The Panthers also scored an early-week win over Midway of Waco, Tex.

Dillon Mitchell’s 29 points and Kentucky pledge Skyy Clark’s season debut weren’t enough to overcome Kansas-bound Gradey Dick’s 20 points and Scotty Middleton’s 19 on 7 of 7 shooting in a 71-61 loss to No. 4 Sunrise Academy, a team it previously beat. Rebounded with a 33-point win over Bishop Walsh (Md.) and a 63-55 win over J.J. Starling (25 points) and No. 6 La Lumiere in a jam-packed NIBC weekend. Beat Wasatch Academy 64-50 and Legacy Early 86-65.

Did not play ahead of the Bass Pro Tournament of Champions in Springfield, Mo., a tournament that includes nationally-competitive Whitney Young (Ill.), Paul VI (Va.) and Milton (Ga.).

Game against Putnam City North (Okla.) in Springfield, Mo. was postponed. Link Academy says the game will be rescheduled.

Up next: Jan. 11 vs. International Sports Academy (Ohio)

After collecting its win of the season in a battle atop Texas — an overtime victory over No. 2 Duncanville — the Eagles collected comfortable winns over Texas 6A opponents Irving and Berkner.

Saw the start of WCAC play delayed with the postponement of its first two games against Bishop O’Connell (Va.) and Archbishop Carroll (D.C.). Has not played since Dec. 15.

After a strong showing at City of the Palms Classic, coasted to three consecutive wins over Florida teams — Westminster Christian, Archbishop McCarthy and Killian — ahead of its biggest test of the season at the Spalding Hoophall Classict: New Jersey power Camden.

The Lions have won eight straight since its season-opening showdown with Camden, most recently collecting double-digit wins over New Jersey schools Plainfield (80-47), Linden (57-47) and Union Catholic (96-28) ahead of an appearance at the Spalding Hoophall Classic.

Did not play this week due to the postponement games Tuesday against Little Rock Central and Friday versus Conway.

Has not played since New Years Day. Faces a tall ahead — No. 1 Sunrise Christian Academy on Saturday at the Spalding Hoophall Classic.

Went 2-1 at the NIBC weekend in Indiana. Beat Wasatch Academy 91-49 behind Judah Mintz’s 25 points and five assists, lost by 14 to Aden Holloway (22 points, 4-4 3-point shooting) and No. 6 La Lumiere and six players finished in double figures scoring in a 99-68 thrashing of Bishop Walsh (Md.).

The Hilltoppers have done nothing to shake the widely shared view that they are the top team in Illinois. Four finished in double figures in a 15-point win over Benet (Ill.) in the Pappas Shootout in Chicago Saturday, led by Caden Pierce’s 17.

Did not play last week. Returns to action against Las Vegas opponent Centennial on Tuesday at home.

Beat CIF opponents Rancho Christian 95-63 last Monday and King 79-56 on Wednesday — both at home — ahead of a matchup with undefeated Norco (Calif.).

Beat St. Mary’s Ryken 76-59 in its return to WCAC play and first game since its momentous Dec. 12 win over St. Frances, then beat Our Lady of Good Counsel on Sunday, 72-55.

Beat the Knox School (N.Y.) by 60 at home with its toughest test of the season awaiting next when it crosses the Hudson River to take on New Jersey power Roselle Catholic in the Metro Classic.