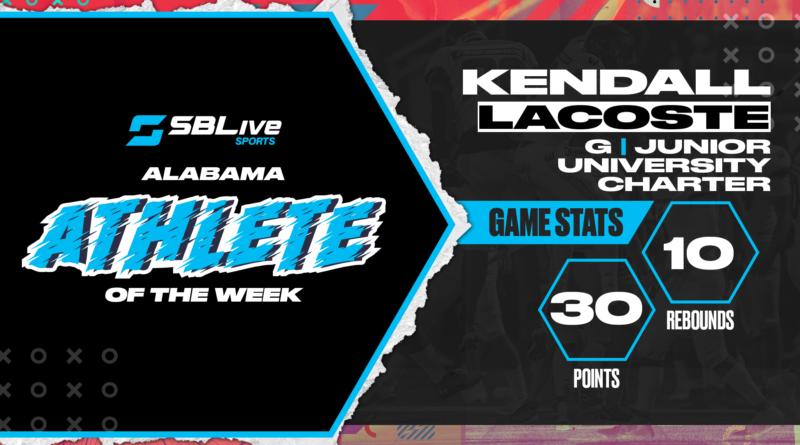 Congratulations to University Charter guard Kendall Lacoste for being voted SBLive’s Alabama High School Athlete of the Week for Dec. 13-19!

The junior had 30 points and 10 rebounds for University Charter in a 55-54 loss to Johnson.

Lacoste ran away with this week’s honor, receiving 93.88% of the total vote.

Ally Smith, Vestavia Hills Girls Basketball: Had 17 points in a 75-35 win over Rogers.

Emma Smith, Vestavia Hills Girls Basketball: Had 16 points and 8 rebounds in a 75-35 win over Rogers.

Makayla Langston, Reeltown Girls Basketball: Had 21 points and a whopping 28 rebounds in a 66-57 win over Horseshoe Bend.

Christian Miller, Wiregrass Boys Basketball: Miller had 14 points, 9 rebounds, and 5 assists in a 71-53 loss against Mosley.

Toney Coleman, Eufaula Boys Basketball: Coleman had 25 points, 5 rebounds, and 4 assists in a 71-49 win over Hewitt-Trussville.