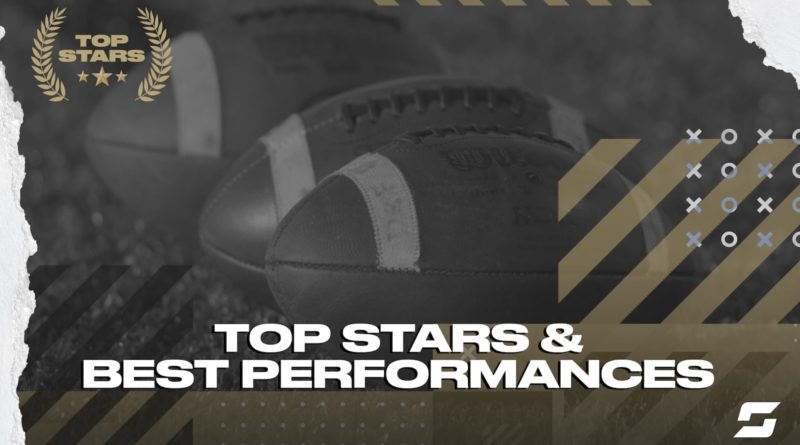 From Montgomery Catholic RB Jeremiah Cobb to Decatur Heritage QB Brayden Kyle, there were several big-time high school football performances across the state of Alabama during the sixth weekend of the 2021 season. Here’s a look at Alabama’s top stars for Sept. 23-25.

Did we miss someone? Tag us on Twitter or Instagram @sbliveal and let us know. We’ll update the post with more top performances as they are submitted by readers.

Banks-Mason had an 86-yard pick-six in Calera’s win over Pell City.

Bonner rushed 19 times for 204 yards and three touchdowns to lead Banks Academy to a 34-19 win over Southern Academy.

Bruce carried the ball 29 times for 210 yards and four touchdowns to lead Center Point to a 32-22 win over Anniston.

Collins racked up 14 tackles and recovered a fumble in Randolph’s 35-0 win over Westbrook Christian.

Holmes returned a fumble 17 yards for a touchdown in Priceville’s 35-12 win over Danville.

Hunter threw four touchdown passes and ran for another to lead Randolph to a 35-0 win over Westbrook Christian.

Jacobs rushed 22 times for 165 yards and two touchdowns to help lead Boaz to a 35-21 winn over Albertviille.

Jude ran for 137 yards and two touchdowns and added a passing TD in Athens’ loss to Hueytown.

Kilcrease accounted for six touchdowns – four passing and two rushing – to lead Brantley to a 42-20 win over Highland Home.

Kyle racked up more than 300 yards of total offense and accounted for seven touchdowns – five passing and two rushing – to lead Decatur Heritage to a 55-14 win over Woodville.

Lacey rushed 20 times for 198 yards and four touchdowns to lead Pleasant Grove to a 35-3 win over Clay-Central County.

Lowe accounted for four touchdowns – three passing and one rushing – to lead Jackson-Olin to a 28-26 OT win over Fairfield.

Madden rushed 17 times for 205 yards and three touchdowns in Lanett’s 19-18 loss to Handley.

McReynolds rushed for 180 yards and three touchdowns to lead McGill-Toolen to a win over Murphy.

Meadows rushed 30 times for 190 yards and three touchdowns, including the game-winning TD late in the fourth quarter to lift Handley to a 19-18 win over Lanett.

Morris hauled in 11 catches for 152 yards and two touchdowns in a loss to Briarwood.

Pate rushed 26 times for 195 yards and three touchdowns to help lead Guntersville to a 44-21 win over Madison County.

Prentice caught seven passes for 177 yards and four touchdowns to lead Calera to a 56-21 win over Pell City.

Reebals rushed for 124 yards and two touchdowns and added 47 yards receiving to help Briarwood to a 38-22 win over Mortimer Jordan.

Shanks hauled in seven catches for 168 yards and one touchdown in a 35-16 loss to Hoover.

Thompson had a 93-yard pick-six in Hoover’s 35-16 victory over Prattville.

Woods racked up more than 430 yards of total offense and accounted for five touchdowns – four passing and one rushing – to lead Hueytown to a 54-20 win over Athens.

Yancy returned the second-half kickoff 84 yards for a touchdown and picked off a pass on defense to help lead Auburn to a 42-21 win over Bob Jones.