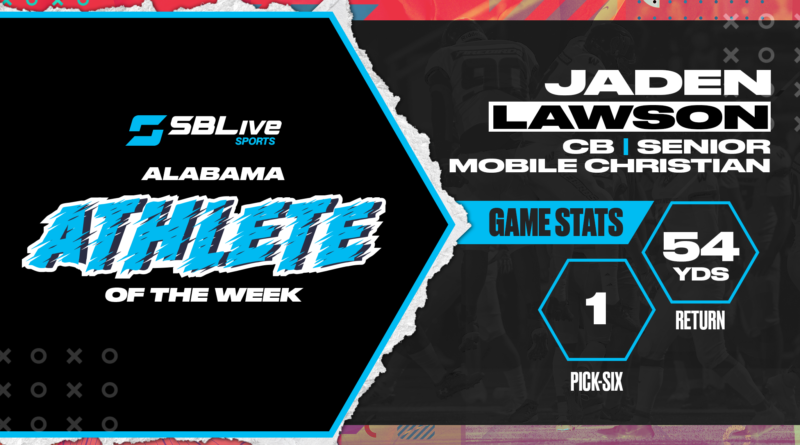 The senior returned an interception 54 yards for a touchdown in Mobile Christian’s 34-0 win over Escambia County.

Lawson received 43.55% of the vote, beating out Fairhope RB Qualin McCants, who finished second with 32.81%. Theodore WR Brayden Jenkins finished third with 12.52% and Baker QB Josh Flowers finished fourth with 1.11%. There were over 19,000 votes tallied this week!

Rya McKinnon, Hoover volleyball: McKinnon had 24 kills, 10 digs and 2 blocks to lead Hoover to a 3-1 win over Mountain Brook on Aug. 30.

Taven Curry, Robertsdale RB: Curry rushed 28 times for 240 yards and three touchdowns to lead Robertsdale to a 21-6 win over Citronelle.

Bryce Dowdlan, B.C. Rain RB: Dowdlan carried the ball 23 times for 190 yards and three touchdowns and caught three passes for 53 yards and a TD to lead B.C. Rain to a 35-7 win over Satsuma.

Josh Flowers, Baker QB: Flowers, a sophomore, rushed for 119 yards and a touchdown on just 12 carries and added a passing TD to help lift Baker to a 29-28 win over Foley.

Tomarrion Parker, Central (Phenix City) DE: Parker had five tackles, including 3 1/2 for a loss, and was credited with a 1/2 sack in Central’s 56-0 shutout of Smiths Station.

Tametrius Pogue, Theodore QB: Pogue went 16-of-19 for 252 yards and four touchdowns to lead Theodore to a 71-0 win over Alma Bryant.

Brandon Purifoy, Vigor CB: Purifoy had nine tackles, including two for a loss, and recovered a fumble in Vigor’s 41-6 win over W.S. Neal.

Logan Sellers, Leroy QB: Sellers went 16-of-21 for 246 yards and three touchdowns and added a rushing TD to lead Leroy to a 49-29 win over Orange Beach.

Jarel Williams, Saraland WR: Williams caught eight passes for 164 yards and three touchdowns, including the game-winning 19-yard TD pass with 33 seconds left to lift Saraland to a 32-25 win over McGill-Toolen.

Diondre Jackson, Baldwin County FS: Jackson had 7 tackles and 3 interceptions in a win over Blount.

Logan Pate, Guntersville RB: Pate had 8 carries for 158 yards and 4 touchdowns and added a 20-yard reception against Fairview.