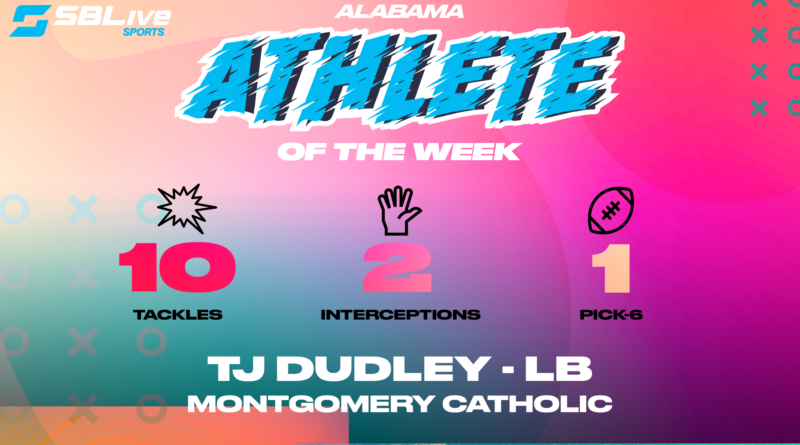 Congratulations to Montgomery Catholic linebacker TJ Dudley for being voted SBLive’s Alabama High School Athlete of the Week for Aug. 23-29!

The senior had a huge defensive game in the Knights’ 50-0 shutout of Charles Henderson: 10 tackles (3 TFL) and two interceptions, including a pick-6.

Dudley received 38.89% of the vote, beating out Mary G. Montgomery RB Jayson Campbell, who finished second with 32.8%. Alma Bryant RB Isaiah Dixon finished third with 22.42%. There were over 92,000 votes tallied this week!

John Blackwood, Hartselle QB: Blackwood threw for 180 yards and three touchdowns to lead Hartselle to a 41-0 win over Mae Jemison.

Jeremiah Cobb, Montgomery Catholic RB: Cobb carried the ball 24 times for 189 yards and 5 TDs to lead the Knights to a 50-0 win over Charles Henderson.

Tyler Cooper, Austin RB: Cooper carried the ball 24 times for 116 yards and a touchdown in Austin’s 17-13 win over Decatur.

Mank Findley, Flomaton RB: Findley exploded for 295 yards and three touchdowns on the ground and added a 66-yard kickoff return for a TD in Flomaton’s 38-14 win over Northview (Florida).

Joshua Flowers, Baker QB: Flowers, a sophomore, ran for 112 yards and two touchdowns and passed for 116 yards and a TD in Baker’s 36-31 loss to Theodore.

Kason Jones, Jackson-Olin RB: Jones ran for 150 yards and three touchdowns to lead Jackson-Olin to a 38-13 win over Calera.

Bennett Meredith, Hoover QB: Meredith threw for 162 yards and four touchdowns to lead Hoover to a 35-7 win over Alpharetta (Georgia).

Collin Moon, Oneonta RB: Moon rushed 14 times for 109 yards and a touchdown to lift Oneonta to a 41-14 win over Hayden.

Tametrius Pogue, Theodore QB: Pogue rushed for 97 yards and two touchdowns and passed for 118 yards to lead Theodore to a 36-31 win over Baker.

Ahamari Williams, Hoover RB: Williams returned a kickoff 99 yards for a touchdown and added 45 yards rushing to help lift Hoover to a 35-7 win over Alpharetta (Georgia).