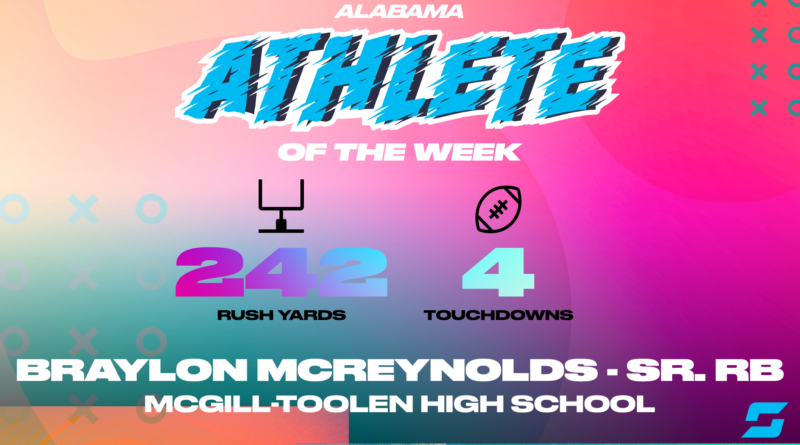 Congratulations to McGill-Toolen running back Braylon McReynolds for being voted SBLive’s Alabama High School Athlete of the Week for Aug. 16-22!

The senior rans for 242 yards and four TDs in McGill-Toolen’s season-opening loss to Pike Road.

McReynolds received 47.07% of the vote, beating out Briarwood Christian RB Luke Reebals, who finished second with 39.28%. Theodore RB Kierstan Rogers finished third with 12.88%. There were over 15,000 votes tallied this week!

Here are the other athletes who were nominated for Aug. 16-22:

Quendarius Story, Valley DE: Story had two sacks and caught a six-yard TD pass to lead Valley to an 18-7 season-opening win over Beauregard.

Kierstan Rogers, Theodore RB: Rogers carried the ball 28 times for 176 yards and two TDs to lead Theodore to a 28-14 win over Saraland.

Anthony Mix Jr., Vigor QB: Mix Jr. threw for 178 yards and connected on two long TD passes to lead Vigor to a come-from-behind 22-13 win over Blount in their season opener.

Conner Harrell, Thompson QB: Harrell threw for 214 yards and four TDs to lead Thompson to a 55-0 season-opening win over Oxford. Thompson is currently ranked No. 5 in the SBLive Power 25.

JT Blackwood, Hartselle QB: Blackwood threw for 270 yards and a touchdown and added a rushing TD to lead Blackwood to a 29-0 season-opening victory over Austin.