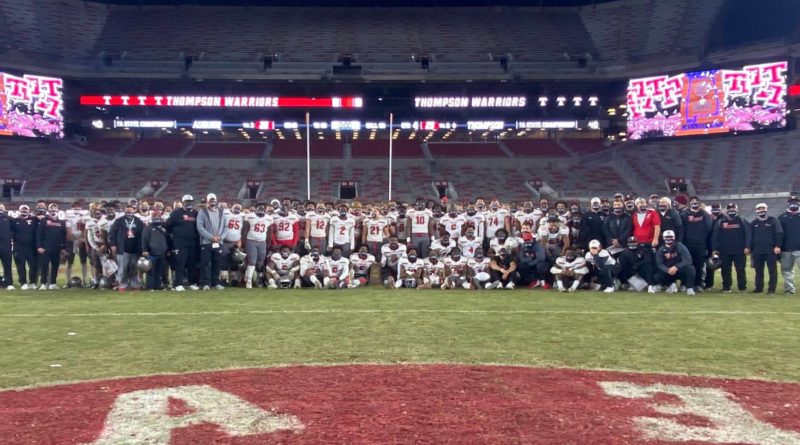 In one of the most improbable finishes you will ever see, the Thompson Warriors scored 10 points in the final 18 seconds to beat Auburn 29-28 in the 7A Alabama football state championship game Wednesday night.

Thompson, ranked No. 7 in the latest SBLive Power 25, lost star quarterback Conner Harrell to injury late in the second quarter. The Warriors struggled without Harrell in the second half and entered the fourth quarter trailing 28-13.

Thompson’s Ryan Peppins’ scored on a 6-yard run to cut the lead to 28-19 with under nine minutes to play, but the Warriors couldn’t get any closer.

Then the unthinkable happened.

As the Tigers were running out the clock in the final minute, they elected to punt on fourth down from their 44-yard line with less than 30 seconds to play. Thompson’s Korbyn Williams blocked the punt, scooped it up and returned it 38 yards for a touchdown. The PAT brought Thompson within two points, 28-26, with 18 seconds remaining.

Thompson kicker Trevor Hardy executed a perfect onside kick, and the Warriors recovered the ball at the Auburn 48 with 15 seconds left. Thompson then picked up back-to-back pass interference penalties, moving the ball to the 18-yard line with 4 seconds to go.

Hardy trotted onto the field and booted a 35-yard field goal as time expired to win the game.

And here’s the game-winning field goal: